2. Evan stopped me at Trader Joe's and explained how deeply the literature we read in Survey of World Literature, especially Rumi and the Tao te Ching, transformed his life. He articulated his appreciation with passionate gratitude. I promised to keep offering these works to my students.

3. Skye came forward with the most generous offers to help me with my photography. Her photography is stunning and she knows the world of lenses and filters and cameras, etc. inside out. It is awfully good of her to offer me her expertise.
Poured Like an Anode by raymond pert at 8:41 AM 1 comment: 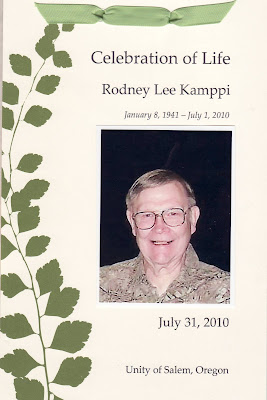 1. I attended the Celebration of Life for Rodney Kamppi this morning. As one person after another spoke about how they remembered Rodney, they affectionately recalled his gentleness, especially with his elementary school students, his generosity with his students and his countless friends and toward his family, his presence at the bowling alley, and his love for competing, whether as a bowler or at horseshoes. I was moved by the service, right from the start when we sang "My Grandfather's Clock", on through the testimonies to Rodney, and by the singing of "Amazing Grace" and "The Johnny Appleseed Song". You might remember seeing Rodney's picture posted on this blog. For quite a while the picture of the 1959 Kellogg High School state championship basketball team he played on served as the banner for kelloggbloggin. Rodney is the fourth from the left in the back row: 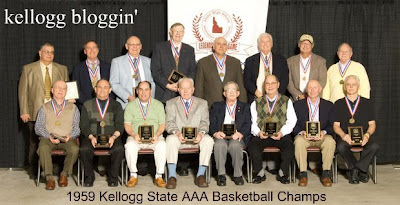 2. I didn't ever meet Rodney Kamppi, but I've known his sister Christy since kindergarten and we graduated from high school together. Christy and I were sweethearts for quite a while in high school. Thanks to a 2007 high school reunion and last year's Lincoln City get together, I am friends with Christy and Ken Carter again and I went to the service to offer my support to Christy, and, as it turned out, to be moved by others' memories of Rodney. After the service I got to talk with Christy for a while and see her sisters and meet her sons. I'm eager to see her and Ken again at the upcoming all-class reunion.

3. It looks like Susan-Louise will be coming to the Kamala River in late August. Another reunion! I haven't seen Susan-Louise for over twenty-seven years. It's hard to believe that it was twenty-eight years ago this coming September when I taught my first ever Shakespeare course and she and Colette and all those other superb Whitworth College students were in it. We had so much fun. I remember saying to the class back then that it would be so fun to all get together thirty years later. Could that happen in 2012? Could there be a Shakespeare class reunion? It would sure be fun.
Poured Like an Anode by raymond pert at 7:50 AM No comments: