1. Bishop Thornton got me thinking yet again about the body of Christ. I'm glad I don't have to be the brain or the mouth of the body of Christ, but I don't think I'm much of a foot either. Maybe I'm a bladder.

2. I enjoyed the many, many suggestions for where to eat Buffalo Wings sent to me on Facebook. I might also have some company for future meals. That'll be fun!

3. I enjoyed taking on a new cause on Facebook this evening: "Mama Mia!" got snubbed by the Academy! No awards? No nominations? WTHell?
Poured Like an Anode by raymond pert at 4:15 PM 7 comments:

1. I went to the Bijou and a woman in line had a ticket to sell and it was fun working with her and the older couple she was with to get our transaction and making change all figured out. The ticket selling trio and some people ahead of us in line got some laughs at my expense. I'm easy to laugh at.

2. The movie "Slumdog Millionaire" overwhelmed my senses in a way I enjoyed and this hedonistic element of experiencing the movie was better for me than the movie's story.

3. I love it: every Saturday night at 8:00 PST, Deep Tracks, XM Radio, Channel 40, plays "In a Gadda Da Vida" and it sounded especially robust to me tonight after I listened to the Duck's men's basketball team win their first conference game of the season against Stanford. What a relief.
Poured Like an Anode by raymond pert at 11:36 PM 1 comment:

For our 90th Sibling Assignment, InlandEmpireGirl raised this question:

As Valentine's Day approaches, think of a specific film, book, poem, or work of art that helped you understand the emotion of love and explain why.

It was very melodramatic and totally fraudulent. It was so ninth grade. It was so 1969. Scott Stuart and I decided to start a rumor that we were going to commit double suicide at the site of the dump out by the Smelterville airport.

It wasn't that fun figuring out how to do the deed. We figured some kind of rubber hose connected to the tailpipe of a running car leading into the car itself would suffice.

The fun part was planning our funeral. We went to all of our friends and asked them to be pallbearers. We made plans for where the funeral would be and we began to stop people in the hall to tell them to plan to come, that it would be a great show.

(Are you thinking what I'm thinking right now? If Scott and I had been ninth graders in 2009, we would have been pulled out of school and marched into a room in front of a battalion of counselors and doctors and pharmacists and placed in a juvenile mental detention center and put on a regimen of drugs to pull us out of our melancholy. Luckily, bullshit was bullshit in 1969 and we were able to make these bullshit plans and no one was the worse for wear.)

We were being dopes.

Our most ambitious plan for our funeral was the music. We committed ourselves to having our favorite song played by our favorite recording artist.

My plan was to invite The Association to sing "Cherish". (You can read the lyrics to "Cherish", here.)

When Debbie and I quit going to dances together and talking on the telephone, that was when Scott and I made our bullshit suicide pact.

That was when I wrote out the words to "Cherish" so I could memorize them and when I heard that Debbie was going to a dance with Mike Farley, I waited until the house was empty and I sobbed and shouted while tears burned my cheeks:

Oh I could say I need you but then you'd realize
That I want you just like a thousand other guys
Who'd say they loved you With all the rest of their lies
When all they wanted was to touch your face, your hands
And gaze into your eyes

But my love was sincere. And silent. I was not going to have Debbie Wakefield think I was like a thousand other guys. I was pure. My love was pure. I was a dope.

I was such a dope, that I took the next verse a little too much to heart:


Thus, I was ready to perish and have The Association sing "Cherish" after I'd offed myself with Scott.

I suppose I've cheated this assignment a little. We were to write about a song that helped us understand the emotion of love.

"Cherish" didn't help me understand it. "Cherish" deluded me, filled my head with unrealistic, exaggerated ideas of love that could never come true, but that have had a grip on me for the last forty years.

It's amazing to me that the fifteen year old in me remains so alive and that the feelings I had about "love" and romance are still so close to my skin. Intellectually, I know that "Cherish" is a pretend song, that it expresses a totally bogus vision of love.

Nonetheless, it got inside me forty years ago and as I look back over the years and look at what a dope I've been and am when it comes to love, the work of art that most shaped my misunderstandings was "Cherish".

My sisters, by the way, wrote much more sensible pieces. InlandEmpireGirl's is here and here is Silver Valley Girl's.
Poured Like an Anode by raymond pert at 9:09 PM 1 comment:

1. This morning, in our Fat Cats and Underdogs course, I was sitting next to Melissa while we were watching "People Like Us" and she leaned over to me and said, "Bill. I'm sorry. I have to leave. My contractions are fifteen minutes apart." I asked if I could help out and gave her some aid with her jacket and backpack. She turned to me and said, "I'll be sure to email you if I won't be in class on Monday." And people ask me why I love teaching at Lane Community College!

2. I loved watching "3:10 to Yuma". I was enamored with Christian Bale's intensity and the way Russell Crowe played an evil man with a sense of aesthetic beauty and a who has a small corner of goodness in his soul. I loved the horses. I loved the train. I loved the scenery. The story and the gunfights were exciting. So was the historical context. And, lastly, please, please Hollywood directors, cast Peter Fonda in more movies. I might like him even more than his father!

3. Molly's ultrasound pictures revealed that she will be giving birth to a girl. She's elated. Moreover, the baby's health is good. Molly's ice cream while bathing diet is working well for her baby!
Poured Like an Anode by raymond pert at 12:15 PM No comments:

1. I am really happy I dragged myself out of my sick bed and spent an hour at the dog trainer working more with Snug. He gets rewarded for relaxing and he gets that great mouth half open contented look on his face. 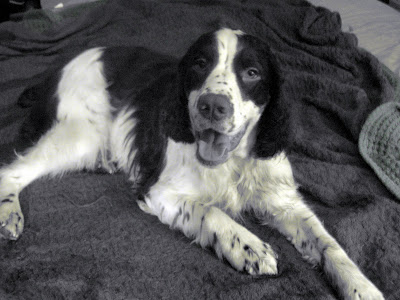 3. I enjoyed the comfort of hour after hour of resting the heating pad on my chest. It kept me warm. Now I'm warm without the pad. That's better.
Poured Like an Anode by raymond pert at 5:33 PM 1 comment:

1. I enjoyed looking over "Shite Gifts for Academics" and playing a bit. It's clever.

2. It was fun discussing "Sky of Stone" as a story playing out the hero's journey.

1. I was so organized this morning that I was able to leave the house a tiny bit late, stop at Starbucks for a coffee and scone, realize I wasn't wearing my glasses, go back home and find them, and still make it to class on time and in calm, unhurried fashion launch right into a discussion of the abstraction in relation to the concrete. I even found my car when I returned to the parking lot. Right away!

2. It was a gut bomb, for sure, and I really enjoyed my Laughing Planet Bubba Burrito.

3. After my night class I fixed and enjoyed a grilled Trader Joe's Sharp Cheddar Cheese and bacon sandwich on Cottage Grove, Oregon's Farmhouse Bakery's Whole Wheat Sunflower bread with a side of salad topped with Sandpoint, Idaho's Lighthouse Bleu Cheese dressing.
Poured Like an Anode by raymond pert at 9:28 PM 2 comments:

1. I remembered where I parked at Market of Choice by lining up my car with a neon pear.

2. I remembered where I parked at LCC today by lining up my car with a solar panel hooked to a street light.

3. I think that calm, disinterested, enlightened, and stunningly handsome albino dog who rests on the floor out in the open in the shopping area at Healthy Pet is a Pit Bull Terrier.
Poured Like an Anode by raymond pert at 10:07 PM 1 comment:

1. I dropped into Gary's Coffee at 5th and High for the first time just as it opened and the guy working there seemed anxious. I had on church clothes. I didn't think I presented danger. I awkwardly made my order, not knowing how things were done at Gary's. My ignorance relaxed him. He told me it was his first day working the shop alone. I told him it was my first time in the place and that he'd been a good teacher. As I left with my coffee, we told each other to have a good one about seven times.

2. I had a blast live blogging during the Super Bowl. I probably wrote more about the gut- wrenching experience I was having than what actually happened in the game.

3. I fixed myself the simplest of post-Super Bowl meals: a grilled bacon and sharp cheddar cheese and a bowl of tomato soup with saltine crackers. I know it pales in contrast to the BBQ ribs, pots of chili, appetizer spreads, chips and dips, pans of lasagna, pasta feeds, pizzas, and other ambitious party food others consumed today. I'm happy for all the mirth and good food people shared. But, I liked my sandwich and soup and crackers. A lot.
Poured Like an Anode by raymond pert at 8:37 PM No comments: