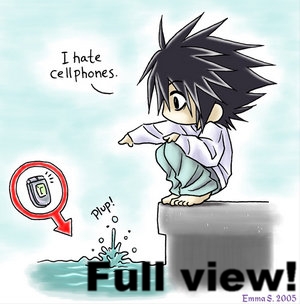 A cell phone will chirp Vivaldi's Four Seasons or Johnny Cash's Ring of Fire at such an inappropriate, seemingly satanically timed moment during a class session, that you'd have to be George Will not to laugh. Laughing at cell phone interruptions in class is a recent development for me. For several years, I detested cell phones. I hectored my students at the beginning of each term about turning them off before class started and not using them in the classroom at all; even before or after class, I insisted they talk on their cell phones outside the classroom. I don't do that any more.

I used to be like Michael Blowhard. He has opined grouchily about cell phones for quite a while. So did I. I would hear a man in the pasta aisle exasperatedly ask the person on the other phone if he should buy the American Beauty or the Mission
brand Rotini, only to say, "Safeway brand? It's on sale? Oh yeah, yeah. Here it is" and my guts would burn and I'd mutter under my breath about courtesy and wish medieval forms of capital punishment for these cell phone abusers.

But that's changed. Any more, when I see someone at one of the campus smoking stations wildly gesturing with one arm and hand while yelling into his palm, I chuckle. I realize that cell phones have made much of what was hidden in people's lives more public. Sit in a coffee shop in Eugene, Oregon and you can hear a mother talk a youngster at home through the steps necessary to make Jello; you can hear the recap of a tragic romantic break-up from the night before; you can learn what fellow teachers are assigning as one student catches up an absent student on what she missed in class that day; you can find out where to party this weekend; you can hear dope being bought and sold; hear a contractor brief a foreman as to what next needs to happen with the dry wall at the site on Laurel Hill; you can hear dog grooming appointments being made, dental appointments being broken, and negotiations being brokered to break loose a hiring committee logjam. It is as if we have rolled back time to the open market place, to a time before telephones and long-distance communication, back to a time when most human business was transacted out in the open, not from sealed off offices out of the sight of the public.

I've quit bitching and started listening. I've decided that if people want to post everything on the World Wide Web from a cat obsessively flushing a toilet to a baby laughing without ceasing to acts of intimacy on a public dance floor, that I may as well stop bucking the march of social history and join in, and enjoy YouTube, blogs, public journals, and other ways of making the once private more public. Likewise, if a cell phone talker is going to make alibis to his parole officer a matter of public conversation, then I'm going to listen. I'm not going to politely turn the other way or act like I can't hear what's being said.

I no longer bristle when I'm helping a student with an essay and his cell phone buzzes. I just say, "Go ahead and get it." The student smiles, quickly deflects the call, and we go on with our work, morale and mutual trust secured. When a student is absent from class and text messages a student in the class about what lie to tell me about why she isn't in class, I laugh and make light of the whole transaction. I can even have the student receiving the text message send the other person a message on my behalf. I have grown weary of trying to impose the etiquette of a land line world onto the cell phone world. I have decided to enjoy the freedom of speech, the enhanced flexibility, the shrinking of privacy, and the expanded boundaries of how many people a person can be talking to at once. I've decided if this is the wave of change, I'm going to surf it, let it carry me, even as I negotiate my way up and down its curl.

I've been reformed. I wouldn't call myself a cell phone apologist. I've just loosened up a bit, and, like a new pair of shoes or a stiff baseball glove being broken in, I've softened my attitude toward cell phones in public and am enjoying myself out in the public a lot more.

But, please, theater-goers: turn them off before Act I. Those of you with cell phones going off during a movie: I'm becoming more and more accepting. It seems more normal to me and not nearly so annoying.

I'm being reformed. I'm getting more flexible. Maybe it's the medicine I'm taking. Or maybe it's wanting to be a part of the world I live in rather than its constant opponent.
Poured Like an Anode by raymond pert at 7:49 PM

"Or maybe it's wanting to be a part of the world I live in rather than its constant opponent."

Also my husband and I have found it to be a life saver, when we are in large box stores. Nothing wears on the nerves than to have to walk up and down the aisles trying to find your spouse. By the 8th time around, murder comes to mind. But with a cell phone, you can call or recieve a call and say, I am by the books section. Sure saves on the nerves.