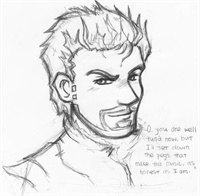 Our cast for the Lane Community College Student Productions Association production of Othello has completed two read throughs of the play. Particularly in the second read through, the actors began to experience the way Shakespeare's language creates character.

I think actors of Shakespeare spend too much time trying to go outside the text of a Shakespeare play to understand whatever character they are playing. I say to the actor of Shakespeare, read the lines, first with attention to correct pronunciation and with attention to punctuation. Where does the voice drop? How has Shakespeare phrased the speeches? What words does the meter or, in the prose passages, the rhythm, place special emphasis on? As this study proceeds, I say listen to the sounds: the vowels and consonants of Shakespeare's words have the sounds of emotions: they moan, whine, hiss, chuckle, laugh, weep, and express other emotions. What I'm saying is that the sounds of the words, apart from their denotations, are often onomatopoeic. For example, when Macbeth expresses is despair in the words, "Tomorrow, and tomorrow, and tomorrow...", the vowels in those words are the very expression of despair. Say those three tomorrows along with the two ands without the consonants: o-ah-oh a o-ah-oh a o-ah-oh....you can hear the ahhh the ohhh the aaaa of suffering and despair. You don't have to do a background check on Macbeth to know his suffering. It's in the language.

It's why I love watching Sparky work with actors and why I love to act under her direction. For her, it's so much about the language, the words; in performance, the Shakespeare plays she directs flourish as her actors forcefully articulate the language , with wide open mouths, with mouths enjoying the words as if they were cold orange slices in July.

Whereas Macbeth's language sings the music of despair by the end of the play and Othello's language sings the torment of jealousy from about halfway through the play forward, Iago's language sings a very different music. Much of his speech is in prose because he is working out miniature essays regarding what he is going to do and he gives disquisitions in prose to Roderigo and Cassio upon such subjects as self-love, virtue, and reputation. These are masterpieces of persuasion, so cogent, so beautifully constructed, so seductive, and so sophistic that even we, as audience, who have some distance from Iago and should know better, can find ourselves being persuaded by his expositions and arguments.

An Elizabethan cliche was that passion, the realm of the emotions, was like a wild horse, and needed the bit of reason, or intellect, to tame it. Shakespeare is always experimenting with the passion and reason of his characters, endowing them with imbalances and portraying the consequences of being too much submerged in passion or too much possessed of reason.

I would argue that of all his characters, Iago is the character who epitomizes an over abundance of intellect (or reason) over against passion. While Iago may take some glee in what he accomplishes, it is cold glee. It is not glee heated, or even warmed, with passion. His is the glee of a tactitian, a destroyer, of a gifted observer of what is weak in others. Rather than ministering to others' weaknesses, Iago devises ways, often on the fly and in the moment, to exploit them. It's cold intellectual energy. It is the worst employment of reason.

In the character of Iago, reason is pathological, not a means of balancing the emotions or the passions. He's incurable. For the pathology to be cured, Iago would have to feel the impact of his ploys. He doesn't. Maybe he can't. Feeling the sufferings of others is not in his composition. Pinpointing vulnerability and exploiting it is in his composition.

When my students first come to Shakespeare's Othello and begin to experience Iago, they want to know what motivates him. But, the more they study the play, the more they see that Iago throws us, as audience, some weak possibilities, but he never really persists in coming back to them. Samuel Taylor Coleridge saw Iago as embodying "motiveless malignancy". His term suggests an Iago who is less motivated by external factors and is acting more upon a diseased soul. I like this understanding of Iago. It allow us to see the senseless violence toward another emobodied.

One way I think Shakespeare understood things differently than we tend to is that we tend to believe in reform. Shakespeare portrays Iago as without repentance, without regret, without remorse, and incapable of being reformed. He is still standing at the end of the play. He is silent. He hasn't a word to say about why he's destroyed Othello and pledges never to say a word. His silence affirms his heartlessness; his knowledge that leaving his deeds unspoken about will deeply frustrate those who survived this world affirms his destructive use of his intellect and his knowledge of others.
Poured Like an Anode by raymond pert at 7:58 PM

If Shakespeare was so great, then why'd he name that one guy after a watch, Casio? An' not even a 'spensive brand a watch neither. Weird.