Jesus the Hard Ass: Widows and the Kingdom of God 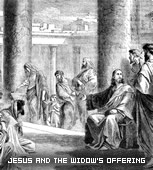 Jesus was no prig. I'm amazed at how often he is portrayed in modern pictures as dreamy eyed or as emmasculated. Far from it. In the story in Mark, he stands up to the synagogue hierarchy and confronts not only their theatrics, but their economic practices, accusing them of "devour[ing] widows' houses." As I understand it, Jesus is talking about widows in both a literal and a figurative sense. Widow is metaphorical for the poor and those whose support in life is gone. My guess is that Jesus has witnessed widows who, having lost their husbands, are unable to meet some kind of mortgage payment and are heartlessly kicked to the curb.

Jesus is a hard ass in opposition to such a practice. In this way, he is radical and not a capitalist. Jesus knows, and he repeats it often, that money and its exchange is heartless, run by rules and practices that are contradictory to the Kingdom of God.

Thus, Jesus taught through the occasional sermon but primarily through his parables that the deepest truths and the most challenging truth we face is to live "kingdomly".

Jesus was a hard assed subversive. He subverted the idea of enemy: he instructed us to love who we think we should hate. He subverted the idea of aliens by saying that those who we treat as aliens are our neighbors. He reached out to the poor, the harlot, the tax collector, the widow, and those possessed with demons. He did not weigh or measure others in terms of respectability. He saw each person as a citizen in the Kingdom of God.

I love teaching at a community college because of the number of, using the word figuratively, widows we work with as faculty. I look around me and I see my fellow teachers working hard to introduce students to academic work and academic culture who have been addicted to meth, beaten up by their husbands, abandoned by the husbands to raise children on their own, left their husbands in order to raise the children on their own, left without their wives because of the wife's drug use or the wife's death, traumatized by war (take your pick: Viet Nam, Gulf War, Iraq, Panama, Granada, anywhere our adventurous armed forces have gone), all widows in the Jesus sense of the world. Our community college tries to help these people find their way in the world. Working in the community college is, for me, missionary work, without the desire to convert anyone to Christianity. Like Jesus, who didn't look to convert people, but to serve them, we serve the students who are widows, accomodate the difficulties in their live, and try to help them get on their feet. If we didn't, we'd be like the scribes. Our long robes would be the illusion of our greater knowledge, our long prayers our lectures, and by a false sense of gatekeeping and rigor, we'd be devouring the houses of these widows.

The widows in both widow stories, the one in Mark and the one in Kings I gave all they had when asked to give and in return more was given to them. In both stories, their poverty and their generosity are seen as the foundation of God's Kingdom. The wealthy, prideful man builds his house upon the sand of reputation, wealth, position, and self-regard. The widow builds her house upon the rock of humility and generosity. Toward the former, Jesus is a hard ass. Toward the latter, he gives his highest praise.
Poured Like an Anode by raymond pert at 9:05 AM

I knew I could skip mass today with impunity and confidence. Bravo Reverend Mr. Pert! you a hard ass!