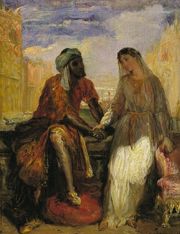 Last year, I played the role of Antonio in Lane Community College's production of Much Ado About Nothing. The year before, I played Snug, the Joiner in A Midsummer Night's Dream. In February, the college will put on Othello and didn't audition for a role. Instead, I will be the line coach and I thnk I will appear on stage in some tableaux created by the director, Sparky Roberts. I auditioned for for these tableux scenes over the phone:
Sparky: Can you burp on demand?
Raymond Pert: Yes.
Sparky: I know you can laugh.
Raymond: (Laugh) Yes.
Sparky: Plan on being on stage, then.

And so I will.

Tomorrow the cast will read the play aloud for the first time. I can't help but remember my first experience with Othello, in 1974, at Whitworth College. I've written about Shakespeare earlier, but didn't really mention or develop how Othello was the play that first impressed upon me that Shakespeare was a genius. In 1974, I had never experienced any character in any story of any kind like Iago. I was dumbstruck. Iago was a complete genius in his knowledge of how to get inside Othello's consciousness and break him down. I realized that it took a genius to create this genius and I was hooked. Shakespeare became the focus of my graduate studies and I have spent much of my teaching life presenting his plays in the classroom and a bit of time acting in them.

I don't know, yet, how Sparky will direct Othello. I don't have any ideas. I don't think like a director. It makes me an easy actor to work with. I do whatever I'm told. I'm a well-behaved and agreeable dog, except I don't need a biscuit as a reward for my obedience.

I do know, however, what ignites my intellect in the play Othello. It's Shakespeare's understanding of race. Othello serves Venice as an outsider. Most productions portray him as black and there is plenty of internal evidence in the play to support that he is black. He is definitely "other" or a character of "difference" in this play.

For Shakespeare, Othello's status as an outsider makes him vulnerable to the machinations of Iago. While Othello is a successful warrior, he is portayed as homeless, a man who has travelled and fought around the world, but has no place that he can think of as where he belongs. Shakespeare treats this homelessness figuratively by portraying Othello as being without a home within himself. He is deeply insecure.

This is Shakespeare's deepest insight in the play. As a deeply insecure outsider in the Venetian world, he is particularly susceptible to the idea that Desdemona is unfaithful to him. Repeatedly Shakespeare puts Othello in situations where he hears himself referred to as exotic, full of magic, a practitioner of spells; out of his hearing he is referred to as a "black ram" and a "Barbary horse". Admired as a mercenary, Othello is routinely referred to in ways that either derogate or exoticize him. He is considered human only by the audience because as audience we see through the racism in Venice and hear his words of passion, confusion, love, and honor.

Herein lies Shakespeare's genius in this play and in The Merchant of Venice. In both plays, he portrays racism, but is not racist. In both plays, the characters are deeply affected by their status as outsiders. Othello is unsure of himself in all matters, save battle. Shylock is embittered by his outsider status as a Jew. Shakespeare goes to great lengths to portray Shylock, not as a caricature of anti-Semitism, but as an embittered man made so by the anti-Semitism that he must face every day in the market place, in his financial dealings, and in relation to his daughter. In both plays, Shakespeare unmasks the nightmare of racial fear and distrusts that lies below the Venetians' veneer of Christianity. The Christians are the villains. Both Shylock and Othello are subjected to bigotry from the Christians and are not themselves portrayed as bitter or susceptible to insecurity because their respective races make them weak; no, they are portrayed as bitter or susceptible to insecurity because they live in Venice, a city Shakespeare portrays as rife with hypocrisy and exploitation.

My Shakespeare students cannot believe that Shakespeare could have written these racially inflected plays "way back then." They seem to think that if the Elizabethan world was itself anti-Jewish and inclined against black-skinned people then anyone who lived in that world must be similarly inclined.

It's difficult for my students to understand that men and women in every age have lived who could imagine something else and who could look at their world and see how generally accepted behavior affected those who were victims of it. It appears that Shakespeare was such a thinker. He was not only a sensitive poet, a writer of sublimely plotted and executed plays, he was also an artist of unbounded imagination who could always envision things as having the possibility to be better than they are, whether he was writing about love, politics, marriage, or race.
Poured Like an Anode by raymond pert at 3:22 PM