Gratitude is an Attitude 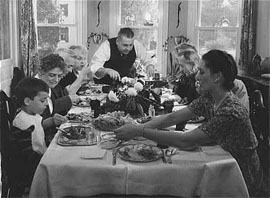 This Thanksgiving morning, I can't help but remember Thanksgiving Day five years ago. The Deke has three children. In 2001, Molly and Patrick were still in high school and Adrienne was living in Eugene and was in the early stages of her relationship with her husband, Nathan.

Some time in the afternoon, The Deke's ex-husband called and asked if he could join our family for dinner.

Our peaceful family Thanksgiving dinner would now be not what we had planned. The Deke's children had an uneasy relationship with their father. (Things have improved.) That he would be joining us for dinner brought on a squall of tears, anger, protests, and recriminations, but everyone rallied and put their best face forward. It was, after all, Thanksgiving Day.

The Deke's ex-husband arrived with a bottle of white wine. We already had wine for dinner, so we put his aside.

I say grace at Thanksgiving Day and as I was getting ready, the Deke's ex-husband asked if he could share something. Being in the holiday mood, I, we, whoever, said, "Sure." Then the Deke's ex-husband pulled a sheet of paper folded in fours out of his back pocket, unfolded it, and said that his girlfriend had found this on the Internet and thought we would all enjoy it.

It was titled, "Gratitude is an Attitude".

Gratitude's an apt sentiment for Thanksgiving Day. But, as the Deke's ex-husband began to read it, we realized that it was not a short something he wanted to read. It was at least two-sided and as he read, we all began to notice the steam rising from the brussel sprouts and the mashed potatoes dissipating; the gravy began to coagulate; the food smelled wonderful and it was becoming a torture not to serve it.

I don't think we had an attitude of gratitude toward this reading.

He finished. We stifled sighs of relief. But, no grace yet. I gave a Hemingway grace. About three words. We ate. I didn't know what to say at the table. I was the step-father. My wife's ex-husband was with us. I was a little drunk. I knew this Thanksgiving Day was not very festive for the kids.

So, every time the Deke's ex-husband spoke, I said how good the food was. At first, it seemed like a nice gesture on my part. I was expressing my gratitude. That seemed natural. But, soon my gratitude for the food started to seem a little strained and my timing a bit weird.

I finished my dinner and went into the bedroom and put on headphones and listened to the all-day broadcast of ESPN Radio's 10th anniversary show.

Early in the evening, the party broke up. The Deke's ex-husband wanted to go see his girlfriend at the hospital, so he got ready to go.

As he left, "Say, we didn't drink that bottle of wine I brought, did we?"

The Deke's ex-husband left, "Gratitude is an Attitude" folded in his back pocket and his bottle of wine back in his hand.
Poured Like an Anode by raymond pert at 10:29 AM

Now that is Gratitude attitude.....how funny, I laughed out loud, I could see you repeating how good the food is over and over as you are getting drunk on wine, fucking hilarious!!!

'Tis telling that you didn't post (don't remember) anything actually from the "Gratitude" script! :-P

I went on line and tried to find the script. No luck. There is a ton of Gratitude is an Attitude stuff, and none of it stood out...and it all kind of sounds the same.

You make a very good point. Thanks.