When Moving Up the Ladder is Stepping Down 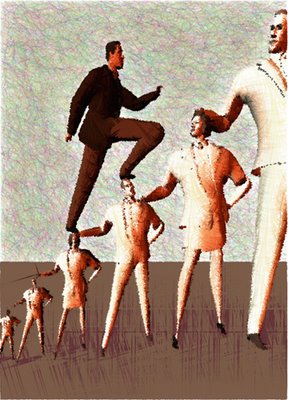 All three men were doing wonderful work in jobs that had lower prestige and moved up the ladder of their professions, and failed.

For many years, my father worked as a journeyman maintenance mechanic in various parts of the Bunker Hill Zinc Plant and Phosphoric Acid/Dry Ammonium Phosphate Fertilizer plant. It was filthy work. Machines that make plants run are out of sight in shit holes. These machines need maintenance. Other machines are high up in precarious places. They need maintenance, too.

Dad worked on weekends on a rotating basis. On those weekends he was also on call. Calls for repairs sometimes came in morning's wee hours. He answered these calls.

Up the ladder, "above" this kind of schedule and "above" sticking his nose in these filthy places was the job of maintenance crew foreman. It was a salaried position. The company offered him a foreman's job. He oversaw maintenance in the lower reaches of the Zinc Plant.

By this time, the 1968 hostile takeover of the Bunker Hill Company by Gulf Resources had occurred. Dad didn't realize the ramifications of managers from this Houston conglomorate exercising their managerial styles at the Bunker Hill. For Dad, it meant working with new-fangled, computer-generated ideas about efficiency. It meant logging how long jobs took, spending time in his office with computer read outs, being pressured to have his crew work more efficiently according to these computer-generated models.

This was not Dad's style. He was a real people man. He thought when he took this foreman's job it would be like a teaching job. He looked forward to working on the ground with the men under his "command", but, in fact, the job took him away from the men who worked for him.

One night, maybe it was my junior or senior year in college, Dad and I went out and had some beers. He might have had bowling league that night. I'm not sure.

What I am sure of is that it was after 1:00 in the morning, because we had closed down a bar together somewhere in Kellogg.

We arrived home. I started toward bed.

Dad stopped me. He sat me down at the kitchen table.

"Let's have another beer." I got a couple out of the refrigerator.

He began to shudder.

He told me he was despondent.

I had no idea what to do.

He thought he had made a climb up the ladder.

He had made a step down.

We were both drunk, so that talk is hazy to me. I was in over my head, but I did hold my dad while he cried.

We never returned to that conversation.

A few months after that conversation, Dad quit his job as foreman. He had nowhere to go but to the bottom of the hourly wage jobs. He hired out on the bull gang. It was bottom of the barrel. They did dirty jobs around the plant like dig ditches, clean up flood damage, and other odd and crappy jobs that did not fit into any one else's job description.

The bull gang transformed Dad. He was back in his element. He had men to bullshit with. He knew exactly what to do and how to do it. He wasn't in charge.

By moving down the ladder, he moved up in happiness. After a while, he bid for a job in the company's warehouse and it was an even better job. He could bullshit and pick on anyone who came in for supplies and he had a crew of men to work with there.

In a similar way, I moved up the ladder at Lane Community College. I spent a year as the chairman of the English, Foreign Language, and Speech division. It was a temporary appointment, with a chance I could be hired permanently.

I wasn't cut out for administration. I often woke up with the dry heaves. I couldn't stand dealing with petty student complaints and having to discipline certain wayward faculty members. I hated having to fire a woman who worked out on the front counter.

I stepped back "down" the ladder and went back to teaching, my love.

As an aside, I also wasn't cut out for university work. I cannot research and think and write and know that I will perish in my job if I don't produce publications. Therefore, the emphasis on classroom instruction and close service to students at the community college is perfect for me.
All it lacks is prestige.

I don't know why we look at jobs in administration or jobs in universities or coaching jobs in more prestigious conferences or in professional leagues as always better, or to be coveted.

For many of us, working in more common jobs is deeply gratifying. These jobs are where we belong. For us, moving up the ladder is definitely stepping down.
Poured Like an Anode by raymond pert at 7:39 PM

I think the community college system is among the most prestigious of American academic institutions. The work it does is vitally important to the American economy and to its students. By and large, each and every one of them want to be there. By what other measure should one gauge value?

Back in August, I was talkin' to a friend of mine by the name a Wilson. He said the kinda thing you're talkin' 'bout with you and yer dad is like Fences. I got me lotsa friends. :)

I don't think I understand that neither.

the irony, of course, in feeling most at home teaching college, is that the very students that you teach are themselves undergoing the same tension that you describe--they, too, feel comfortable in some way--they are happy with their old identities--or they were before they come to college. and yet they come to lane precisely to undergo that transformation--my father calls it the "great leap"--from where their family always has been to a new, unknown place where the educated live--a place, you might say, of prestige. and so i was reminded in reading your blog, that prestige is really a relation, and not an absolute. to those students you love to teach and yet feel no prestige in teaching, you are prestigious....i suspect, too, that your dad felt a kind of prestige among his compadres....the prestige of being "known" in a deep way, and being respected.

I use to say, it was better to be a big fish in a small pond, than to be a little fish in a big pond, when people asked why I didn't go back to school to be come a nurse.
I did my job well. I felt comfortable where I was. And I felt I was needed where I was. When you step up, it seems the games begin.. and I don't like games, I like life as it is.