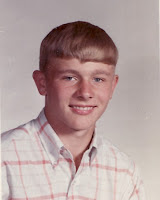 It was mid-February. Our ninth grade basketball season was drawing to a close. By any measure, we'd had a great season. We'd defeated Wallace, Lakeland, Coeur d'Alene, Post Falls, Kootenai, and St. Maries. The only team we never could beat was Sandpoint.

Our last game was against Pinehurst and it was, for many of us, the most important game of the year. We knew the Pinehurst guys. We'd been football teammates in the fall because the ninth grade team combined Kellogg and Pinehurst. Many of us played Babe Ruth baseball and had been All-Star teammates in the summer. We wanted to beat Pinehurst really bad.

We'd already defeated Pinehurst once, earlier in the year on Pinehurst's home court. I don't remember any of the details of that game. I do know, however, that none of us felt overconfident because we had beaten these guys once before. We were mentally and emotionally prepared for a rugged contest.

While I was fired up to play Pinehurst that night, I didn't want our season to end. I didn't know it at the time, but that ninth grade basketball team constituted the last time I ever experienced success on an athletic team. It was the last time I performed well over a season and the last time I felt a part of a selfless, disciplined, joyous team that loved to play together and understood how important each of us were to our team's success.

I'd had a particularly good season. Competition at the ninth grade level fit my style of play and, being more physically mature than most guys my age, I enjoyed a certain level of dominance over most players on other teams.

My role on the ninth grade team was very well defined. I roamed the baseline in a 1-3-1 offense and our offensive schemes kicked into gear when one of our guards got the ball to me and an intricate series of movements without the ball and rotation about the floor took place.

If I could shoot consistently from 12-15 feet along the baseline, it opened up our whole offense. To help form me into a scorer, our coach, Jim Currie spend hours with me, making me shoot over him, helping me develop an arching and soft jumper.

Going into the Pinehurst game, I was our leading scorer. In all but a couple of games, I fulfilled my role of scoring along the baseline superbly and it opened up numerous scoring opportunities for the rest of the team.

When we came out for warm-ups before the Pinehurst game we were really pumped. We noisily and energetically went through our warm-up routine and were all springing high off the floor, giving each other a lot of skin, and could feel ourselves ready to pounce on the Pinehurst Pirates.

One of Pinehurst's better players was suspended for the game, and that player would have been my man to guard and be guarded by. His backup was an inferior player without a lot of skill, but was a tough kid, a guy you wanted on your side if a fight broke out.

I jumped center against him to open the game and we won the opening tip. Quickly, we got into our offensive set. The gym was packed. A lot of Kellogg adults who didn't have kids in school were there because they'd heard how good we were. In addition, Pinehurst's fans helped pack the gym.

The guards moved the ball out front and I swung along the baseline to the side the ball was coming around to and one of our wings passed me the ball.

I was about fifteen feet from the basket.

My defender move close to me. I put the ball in front of me, took a step forward as if to drive to the hoop, and he retreated. I immediately stepped back, jumped straight up, floated a jump shot, and it softly, but with authority, snapped the twines.

Only eight seconds had ticked off the clock. When I made that jump shot, the large Kellogg contigent exploded.

That moment seemed to last for twenty minutes. In my heightened state of excitement, I glanced to the crowd and it was if I could pick out and identify each face in the crowd. I saw my dad. I saw Dick Costa. Mike Turner. Con Pearson. Joni White. All of them and they were ecstatic. My teammate Roger Pearson clapped once emphatically when I scored and slapped me hard on the ass as we set up our full court press.

I didn't mature much as a basketball player beyond the level I played at in the ninth grade. By the time my senior year rolled around, I languished on the bench and became the team clown.

But, no matter how I awful I felt about my talents in baskeball in high school, I could always return to the vivid memory of a perfect jump shot and gym exploding in joy because they witnessed that uncomplicated shot and could tell that they would see a nearly flawless night of basketball from our ninth grade junior high team.
Poured Like an Anode by raymond pert at 9:58 PM

You were good looking, too. (Did you ever go through an "awkward" stage like the rest of us - where your nose was too big or your face broke out?)

Wish I could remember that game. I can't even remember who played on our team (the Pinehurst, losing team).

Where was I ? I never remember going to a game at Pinehurst. I probably had to stay home and babysit and watch Laugh In or Get Smart.