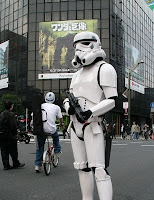 1. I've decided to assume the persona of 21st century guy at LCC. Our college is having problems. So, I say things in meetings like, "'Effieciency? That's so 1998! It's the 21st century! The 21st century is about process, unit plans, assessment reports, input, productivity, accountability, and so on! I embrace the 21st century!"

2. One thing I do really appreciate about the 21st century is the continued improvements in dentistry. I have my teeth cleaned every three months instead of every six months and I really like Trish, the hygienist. In fact, here are words I've never written or spoken before: with Trish as my hygienist, I enjoy going to the dentist.

3. Another thing I enjoy about the 21st century is Web 2.0. I think for the hell of it I'll create a myspace page to advertise my winter quarter World Literature course and make some kind of YouTube thing, also. Stay tuned!
Poured Like an Anode by raymond pert at 7:09 AM

I'm ashamed to admit it's been two decades since my last visit to the dentist.

I'm blessed with good, strong teeth (no cavities ever), but how long can this last? I don't even floss all that often.

And the longer I wait, the less likely I am to make the appointment.