Sibling Assignment #37: Another Pair of Eyes

This week's Sibling Assignment comes from InlandEmpireGirl. We are to write about a significant event with a pet that made us glad to have the pet. I'll post links to my sisters' posts as soon as they put them up.

Yesterday, my English Springer Spaniel, Snug, and I went to the ocean at Heceta Beach, a few miles north of Florence. 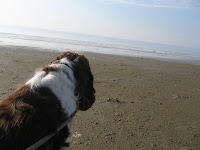 Maybe it was because I had my camera and I've been doing experiments with letting my camera be my eyes. Whatever the reason, yesterday I accepted Snug's invitation to see the ocean and the beach the way he does and I tried to make a record of his perspective by taking pictures of it -- and even when I couldn't photograph his perspective, I tried to see this most familiar beach in a new way, from a Snug's eye view.

But, even though I 'd thought of the ocean as perilous and unpredictable, not until Moby-Dick 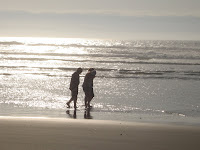 Yesterday, watching Snug chase seagulls and other birds and watching him stalk the beach and nose his way through the beach grass and spontaneously charge toward a new gull squawk or dash to sniff out a tufted puffin carcass, I realized that he was not in a county park or at a human recreation area. Snug was in the wild and the sea breeze, banquet of wild smells, great expanse of sand and ocean, and seagulls diving at him, soaring above him, and often taunting him stimulated the core of his being so that he could be something like a wild dog, not so domesticated.

Snug also roused primal fear in me yesterday. In absolutely obsession with particular seagull, Snug bounced five yards, ten yards, fifteen yards, and then nearly twenty yards out into the ocean. The water was shallow and the incoming surf was mild, but I kept 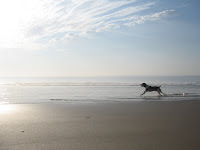 thinking of undertows and wilderness forces in the ocean that pull outward as well as push toward shore. I called, "Snug! Snug! Come on, Snug! SNUG! That's enough! Snug, come on! SNUG! SNUG!" Mine was a feeble voice in the wilderness. Between Snug's ecstatic barking, the wind blowing in my face, and the splashing and crashing of the waves, my calls to Snug were vain.

I was out of my element. I only hoped Snug was in his. He is a water dog.

Snug gave up after about fifteen minutes and resumed his waterlogged sand wolf stalking of the beach, outsmarting my every attempt to leash him to head home, taunting me the same way the seagulls had taunted him. But, I knew that if I started back toward the car, Snug would follow.

As much as he loves teaching me about the wilderness of the ocean, Snug loves the comforts of the hearth, too.
Poured Like an Anode by raymond pert at 9:07 AM

I thoroughly enjoyed reading this......I was right there with you both on the beach. Thanks for stopping by my blog and for the Friar Lawrence quote.....R&J is one of my favourite plays!

Now I need to take a wondering trip to the beach. My grandfather always told me "never turn your back on the ocean". He understood the wildness of it. For me the ocean is freedom. I've never feared it, just respected it.

I had never thought of the ocean as the wilderness either. What a perfect day for catching pictures of Snug and other artifacts. I love your last line... ours also love it back at the hearth. On our last road trip they crashed about a mile from home. They couldn't keep their eyes open looking for cows and deer one more second!

"As much as he loves teaching me about the wilderness of the ocean, Snug loves the comforts of the hearth, too."

The "too" at the end makes me think that we could become one with the wilderness for a while. . .but we are more domesticated than our pets.

That was a really neat perspective. I had never thought of the ocean that way either. Now I can picture when I was little, with the dogs we've had over the years and walking on the beach. Does Snug roll in the fish? Ours always did this, why do you think that is? LOL