Driving for over 12 hours on the 11th on into the 12th from Kellogg to Eugene, and sleeping most of the 12th has made these two days almost seem like one. But, without question, six beautiful things occurred, and here they are:

1. I dropped off pickles on behalf of InlandEmpireGirl at Delta Dawn's and got word that DDawn enjoyed them, almost to the point of tears. It was a recipe of DDawn's mother, so InlandEmpireGirl helped awaken sweet feelings in DDawn for days gone by (but that were suddenly back!).

2. Guilty pleasure: Belly Buster and a tub of French Fries at Zip's in Ritzville!

3. I've never seen such a sustained pink and orange sunset glow as today, driving from Ritzville to the Tri-Cities. The sun seemed almost frozen, it dropped so slowly and the pinkish golden light made the whole landscape seem woozy. I wondered if maybe I was high on Zip's and Diet Pepsi!

4. I walked in the back door. I hadn't been in our house for two months. The oak wood kitchen floor and the newly cleaned counters and sink looked heavenly to me. I immediately felt that I was in the right place, even though I had just left the right place. I definitely have two lives.

5. I needed to sleep most of the day today after driving until 3 a.m. The house was still, the room cool, Snug needed the sleep, too, and I just let myself glide under the thick quilt of near comatose sleep. 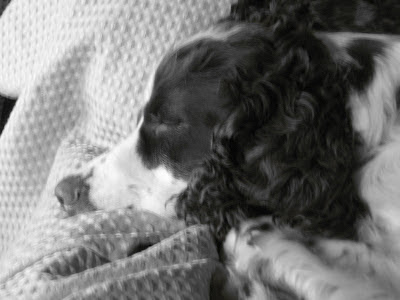 6. Snug has been a gentleman since returning to Eugene. He's been gentle and playful with the Corgi's, loving and obedient with the Deke, and, as always, a good pal for me.
Poured Like an Anode by raymond pert at 8:26 PM

Glad to hear you made it safely home, and with a beautiful sunset as a bonus!! I too returned safely home from my travels to Boise. It was a great training session, and I learned alot.