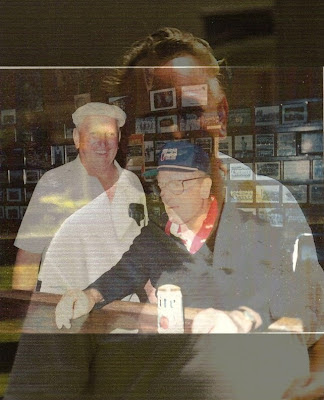 My siblings and I are writing about whatever events we want to surrounding our father's death. Silver Valley Girl's wrote a moving tribute and describes her struggles here. InlandEmpireGirl's beautiful reflections upon and pictures of the best day leading up to Dad's death are here.


Today is the eleventh anniversary of our father's death. It was a Saturday. Dad had been in an in-between state. He didn't seem conscious, but in his pitching and thrashing around, he wasn't really asleep or unconscious either. I'm not knowledgeable about the hours leading to a man finally dying. I can only say that Dad, in his silent thrashing, sure seemed to me to be fighting for his life.

Dad was too big for my mother, a nurse next door, and me to handle. His mattress slid off the bed and he was at an awkward angle, one quarter of him on the bed, three quarters off. Finally, with the help of some medicine and with our combined efforts we got him back on the bed.

Once Dad quieted down, he breathed with a whistle. His breath would whistle in, faintly, and then whistle out. The whistles became farther and farther apart, quieter and quieter.

I stayed in his room with him. I turned on a program on VH1. It featured Paul McCartney. I used to know which McCartney song was playing when Dad's whistling stopped and he was dead. It was early afternoon, June 1, 1996.

Two things stand out for me from those weeks I was home while Dad died. First, I remember my anger. I was mad at Dad. I don't know how correct I was, but, at that time, I felt sure that Dad's years of alcohol abuse had been a chief cause of his liver cancer. It might have also been related to the toxic environments he worked in at the Zinc Plant, but, eleven years ago, his drinking was what was on my mind and in my craw.

I was alone with Dad most nights from about ten or eleven o'clock until Mom took over at about five a.m. I wasn't always at Dad's side, but I was nearby and ready to help him if he needed to go to the bathroom or called for water or something to eat.

Sometimes, when I knew he was asleep and Mom was asleep upstairs, I would curse my dad. I got thoughts and feelings off my chest about how much time I thought he wasted being drunk and how much I thought our relationship was not what it could have been because of alcohol. I hadn't spoken these things to him much when he was healthier. I'm not sure it did much good to say these things when he was unconscious and dying, but it's what I did.

The second thing I remember was how many friends came to see Dad as he died. It was really inspiring. My anger at night was more than offset by the inspiration I felt as I learned in such a concentrated way how many men loved my father.

Men he worked with at the Zinc Plant came by. Men he drank with uptown and watched football and baseball games came by. Men he golfed with. Men he had known most of his life. Dad had lived in Kellogg all but a handful of years. He had long friendships. These were more loving friendships than I had known. More was between Dad and these men than the beer. They were kind to him, talked to him, offered my mother their help, and were supportive of me and my sisters.

Once Dad died, the flowers, cards, and other tokens of love overwhelmed us. His funeral packed the church. Members of my mother's family drove up from Orofino. So did friends of Mom's from Orofino. People from every walk of life in Kellogg attended who had known Dad in the bars, at the Bunker Hill, or at the golf course.

Especially moving for me was having about ten friends from my graduating class come, several of whom considered my father every bit as much their friend as mine; some of them hung out with my dad at the golf course or at the bars long after I had moved away.

My anger dissolved. My understanding of Dad was transformed in the last week or ten days before he died in what happened around his funeral. My thinking about Kellogg, about what makes a man a good man, about how love works, about friendship and long-term commitment to friendship, and about how friendships formed and were sustained in Kellogg deepened in the time around Dad's death and funeral. I woke up. I came to see that I hadn't really understood Dad very well. I'd been unfair in some of my anger.

I often think about how much more fun Dad and I would have now that I've dedicated myself to being a Kellogg guy. I wouldn't feel the distance. I wouldn't feel in limbo. I'd enjoy him and his friends so much more.

Instead, I'm left to carry on the way of life I learned from him, as best I can. I'm grateful for all I learned about being an everday guy from him and happy that coming to realize what I did has freed me from the anger I felt.

I miss Dad. His memory gives me and my mom and sisters a lot of good laughs. Above all, I miss his devotion, his devotion to Kellogg, to his friends, and to his family. I hope I can carry this devotion forward in reality as much as I want to in my desires.
Poured Like an Anode by raymond pert at 6:48 PM

He sounds like a wonderful person and much loved.... what more can one ask for then to be loved...

When you write about your dad, it feels as if he is still a man living and breathing. Perhaps in writing about him, you can continue your relationship with him and even continue to learn from him. It is obvious he is still very much alive in your heart and in your work.

If you die before i do I will be there.