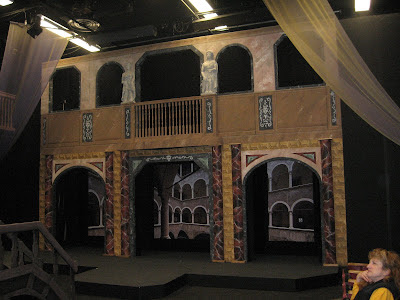 During the summer of 1991, I attended an evening of "competitive" improv. I think four groups "competed" with each other. It was much like "Whose Line Is It Anyway?", and judges awarded ratings to each group's performance. The groups coached by Judith "Sparky" Roberts (pictured above) particulary impressed me.

I was more cheeky in 1991 than I am now. So I wrote Sparky a card, telling her I was going to be teaching a section of Shakespeare in the fall and would she coach any of my students who might like to act our a scene from one of the plays we would study for the class.

Two students wanted to act. They gave their scenes in the basement classroom, with the only prop being a couch that was always in the classroom for Anne Marie Mauer who played Juliet.

And, so, that was the humble beginning of the Shakespeare recital.

The next quarter a group of students played the trial scene from "The Merchant of Venice". Sparky moved their performance to the Blue Door Theater. Their classmates and some of the actors' family members comprised the audience. They performed to one side of the Blue Door.

Over the years the recital grew. Sparky started making her acting students part of the recital. Then she started teaching an Acting Shakespeare class, and students from her class began doing scenes.

A couple of years ago, the recital became a Showcase. Posters were pinned up. The Showcase was advertised in local newspapers. Several years ago, an ensemble of musicians began accompanying the show. What had started as a decidedly amateurish night of acting has transformed into a more advanced night of scenes being peformed.

The theater department's Globe facade, seen above, now is erected for the Showcase. Sunday night students sang songs from Shakespeare plays. We had a full house of audience members. Nearly two dozen scenes were presented. Treats were sold at intermission.

What began as a modest class exercise has grown into a community night at the theater, with literature students (many acting for the first time), members of the community, and acting students performing scenes.

My role in the Showcase has diminished. That's fine. I no longer mc the event. I play silent roles when an actor needs an actor to address a speech to.

But, I'm proud. A cheeky note after a wonderful night of improv back in 1991 has grown into a full production with stage manager, production crew, Globe facade, and a full house audience.

I never saw this coming, but thanks to Sparky and a group of ambitious students hungry to act Shakespeare, the Shakespeare Showcase has turned into a sparkling night of theater and enthusiasm.

Ahhhh!
Poured Like an Anode by raymond pert at 12:16 AM

Sounds like a mini Shakespearean Festival. . .Maybe it will grow into a weekend, then week long event culminating in the Showcase.

Have you contacted a local Society for Creative Anachronism? Many communities have an active group. They dress up in period clothing, learn the art of war with ancient weapons, (probably even cook foods over open fire). They give demonstrations of their skills when they get together. Sometimes they even have jousts.

Some localities have "royalty" that presides over the region. Most of the groups I have heard of are steeped in the Middle Ages. They are kings, queens, princes, princesses, knights, serfs, etc.

You should be proud. What a neat event!

What a thing of beauty. How wonderful to breathe life into something and watch it grow and soar above anything you ever imagined.