Our sibling assignment this week is to write about a camp or camping experience. Silver Valley Girl's piece is here. InlandEmpireGirl is unpacking from her writing retreat and snapping pictures of her homecoming (here) and now has posted her piece here.

At first, I was going to write about a drunken camping trip three friends and I took to Priest Lake in late spring in 1974. In the interests, though, of blogging integrity, I don't know how much of it I can remember. I do, know, however, it took us eight hours,(over twice the normal time) to drive from Kellogg to Priest Lake. We missed a turn somewhere and got past Bonners Ferry, near Canada, before we realized it. It was the kind of young men's boys' weekend outing that we were fortunate to survive.

For three straight summers, 1965-67, I went with Troop 300 to boy scout camp at Camp Easton on Lake Coeur d'Alene.

One activity we decided to try was going on a wooden raft outing on the lake. The idea was that we would lash logs together to build a raft, complete with a canvas sail, and let the wonders of God take us out into the lake and back.

The first year our troop did this, we followed the raft building directions we'd been given, lashed a raft together, and headed out.

We must not have read the directions quite right. Or maybe we were lousy lashers.

We got a ways out into the lake, a pretty significant distance from shore, all with life jackets on, were singing "I'm Henry the VIIIth, I Am", and the raft began to deteriorate.

We scrambled. We Our scoutmaster, Vaughn Evans tried to tighten the fastly loosening knots as the logs strained to pull farther and farther apart from each other.

It was a lost cause.

The raft collapsed. All we could do was guide the carnage back to shore.

This was quite a job. A breeze made the logs hard to control, but we rounded them up, and made our push.

I was one of the first, with a fellow scout or two, to get a log to shore. On second thought, maybe I just got myself to shore, sans log. That was probably the case.

I must have forgotten, at that point, that part of the scouting code that encourages a boy scout to help old ladies across streets and to go back in the water and help fellow scouts and the scoutmaster guide logs to shore.

I found a rock and took a sunbath. 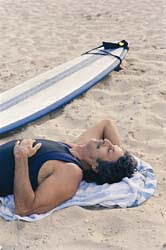 I don't think I was alone.

Vaughn Evans, our scoutmaster, was a pretty mild-mannered guy.

Not that day. My suddenly surfer boy move to get dry and soak up some rays enraged him.

He came unglued and used some language that probably turned Sir Robert Baden-Powell* and Stanly Easton over in their graves.

Beyond a tongue lashing, I don't remember any other punishment, but if we'd lashed that raft together as well as Vaughn Evan tongue lashed me, we could have floated on that lake forever.

*the founder of the boy scout movement
Poured Like an Anode by raymond pert at 11:45 PM

Great story. "Have you lashed a lasting log-laden raft and launched it leisurely on a large lake, lately?" she laughed.

(Perhaps I shouldn't leave messages when I am extremely tired).

Great memories of Camp Easton, RP. I was on the staff there from '68 to '72, when my dad was camp director. Great place, fond memories. Thanks.

I loved the line about the Boy Scout code and how you just sunbathed. Perfect! Too bad you didn't have a Cuss Box there. You may have made some money!