Rest in Peace, Dad: Here Are Some Things You Taught Me 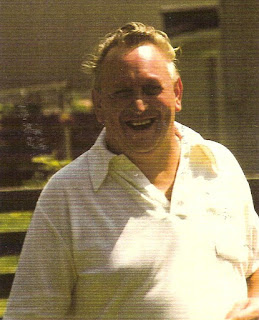 Thirteen years ago, on June 1, 1996, my dad died of liver cancer. He died early in the afternoon, in his own bed. His last morning had been a brutal test for my mom and me. Dad began flopping around, as if he were physically fighting the end of his life. He wasn't really conscious, so he couldn't hear our pleas for him to settle down. His flopping caused the mattress to slide off the box springs and Mom and I called our next door neighbor to help us lift him and the mattress back on the box spring. We succeeded and then we called Dad's medical guy who recommended that we give Dad a dose of his pain killer, morphine, I believe, and soon after I poured it, crushed in a tablespoon of water, he settled down.

Gradually his breathing slowed down and soon his breath came out in only a slight whistle. He died peacefully after a morning filled with thrashing. I was with him when he died and could hardly tell when he passed from being alive to having died. His breathing had become so weak, that when it ceased, it bore little difference to when he was breathing.

So, today, these thirteen years later, I've been thinking about what I learned from Dad and decided to compile a list. The order is random.

I learned from my father:

1. How to drink. Dad was kind of adamant when I turned eighteen/nineteen years old that I learn how, above all else, "to pace" myself, to quote him, when I started drinking beer. He never recommended moderation. He assumed that if I was going to spend a day or a night drinking beer, that it was not for any reason other than to get drunk. But, he told me again and again that I needed to "pace myself" and not drink like a "meat head". He also reminded me constantly that "a lot of people think being a drunk is fun. It's not. It's hard work." In other words, he knew that getting drunk always came at a cost, but the one thing he never did and would never allow me to do, was miss work, or, when I was in college, miss class, just because I felt lousy after a night of drinking. I don't remember Dad ever missing a day of work because of a hangover or because he was still drunk when he woke up in the morning and I followed in his footsteps. It didn't matter what shape I was in, getting drunk was never a reason to miss work or miss class. I always remembered, "A lot of people think being a drunk is fun. It's not. It's hard work."

2. Where to hit a baseball in order to pull it to right field. I threw a baseball right handed, but I was a left handed hitter. Therefore, if I pulled a pitch, it was down the first base line or into right field. On more than one occasion, especially when he was shaving and getting ready to go tend bar at the Sunshine Inn, Dad would call me into the bathroom and would hold his hand out about arm's length and tell me, "Here's where you want to hit the ball. Out here, out in front of you. Your power is to right field and if you hit the pitch when it's out here, you are gonna pull it and hit the ball harder and farther." I succeeded at that sometimes. But, I was a stupid hitter. I got it in my head, especially in high school, that I needed to hit with a 34 or 35 ounce bat. It was too heavy for me, so my swing always dragged and I rarely got the bat on the ball out where Dad taught me to do it. I got some great extra base hits to left center and down the third base line and Dad always gave me a hard time when my hits went in that direction. If I'd thought about using a bat I could generate speed with, a lighter bat, I might have succeeded more in doing what Dad taught me. I was too stupid to realize that.

3. Respect for rivers, especially the North Fork. Dad played around and swam in the North Folk a lot when he was a kid. He knew about too many deaths that occurred. His idea was that a person has to respect the river's strength and not get cocky. I didn't spend much time in or on the river, but if I did, I heeded Dad's words and never forgot them, "You've got to treat the river with respect, son. It's stronger than you. Always. Don't forget it."

4. How to love and hate sports franchises. I've fallen off this one a bit. I no longer have seething feelings of hatred for one professional or college team or another, nor do I have passionate love for them the way my dad did. Dad's love and hate was pretty clear: love the 49ers, hate the Cowboys; love USC, hate Notre Dame; love the Yankees, hate the Dodgers; love the Vandals, hate the Cougars, and on and on. I enjoyed the times when I was younger when I felt these same passions and even had the guts to branch away from Dad. I fell in love, as a kid, with the National League (except the Dodgers). Yet, in '67, we both got caught up in the Impossible Dream of the Boston Red Sox and I threw my NL allegiance aside for Yaz.

5. How to give people a hard time. Dad lived by a well-hewed principle: "If I didn't give you shit, how would you know I loved you?" As I've grown older, I've come to appreciate this principle more and more. I thrive on finding the student or the fellow teacher or friend that I can give a bunch of shit to and they won't lay some Fruedian interpretation of it on me, that I am covering up deep hostility by giving people shit. Why do I love going to Kellogg? Why do I love being with my high school friends so much and why do I love seeing my dad's friends when I return home? They give me shit. They needle me. They tease me. I get to do the same in return, although living in Eugene has left me rusty. My dad was a major leaguer in the sport of giving people shit and I heard friends level him in return. Dad relished it. Even as he was dying, if someone came to visit him and showed the least weakness, Dad, dying of cancer, pounced on them and did his best to the end to keep the shit giving alive.

6. How to make people laugh and have a good laugh, too. If he was going to give people shit and if it was going to get it laid on him, my dad knew he'd better have a great sense of humor and he sure did. He was amazing with plays on words, making faces, coming up with funny voices, coming up with nicknames, thriving on dirty jokes and off-color comments, seizing an opportunity to give the needle and enjoying it being given back to him. Dad was sarcastic, ironic, sanguine, and jolly; he loved people, unless they were phonies. Phonies couldn't laugh, couldn't give and take, couldn't just be real. Dad's disdain for phonies was thick, caustic. But, put Dad in his element, whether at Dick and Floyd's or at the Zinc Plant or with his good friends in a living room watching college football and my sides would ache from all the laughter. I'm not in my Dad's league, but every once in a while I get a good one off and I sure enjoy having other people make me laugh.

7. How to be sentimental. Dad poured himself a brandy on the rocks, sat in the living room, and listened to Dinah Washington or Sarah Vaughn or Teresa Brewer and he went into a world of his own sentimentality. He was very sentimental about my mother. Numerous times he found ways to get me alone and he'd tell me, while drunk, how much he loved my mother and how he could never live without her, and would weep. He was sentimental about Christmas, about the USA, and about his family. My dad's sentimental side surprised people sometimes because he so often was playing the role of being gruff or because his sense of humor. Dad's heart was on his sleeve. I'm like my dad in this way, especially in private. I'm deeply nostalgic and tend to live parts of my life more romantically than logically. I learned it from Dad.
Poured Like an Anode by raymond pert at 5:47 PM

Bill, this is a beautiful tribute to your father. One thing I remember about him is that he reminded me a lot of mine. I was spending the night with Christy once - We were in the 6th grade. I'd come downstairs for a drink or something, and your dad was sitting in the chair with a beer, watching TV. He struck up a conversation with me..How was I? Who were my folks? He nodded slowly and smiled as I told him that my dad was the barber on Division Street. He asked me if Christy and I were having fun. I was stunned that anyone's dad would take the time to actually converse with me! I decided that he was definitely a cool dad.

You came down for a drink, huh? Did you have a brandy on the rocks? A whiskey and water? A vodka/Seven? No wonder Dad enjoyed talking with you!

Okay, seriously: thanks for telling me this story. It sums up Dad pretty well. I enjoyed us kids and always took an interest in our friends. Sometimes his interest in our friends could be pretty funny if he got on a roll teasing them and giving them nicknames and stuff, but it sounds like he was a gentleman this time!

This is simply stunning. I love the way you paint your father. He must have been so proud to have you in his life.