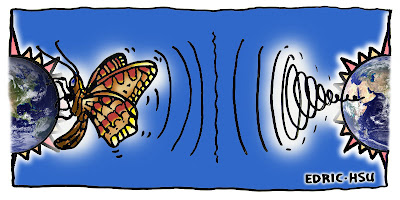 It's like that idea in chaos theory that one butterfly flapping its wings could eventually have a far-reaching ripple effect on subsequent historic events, like causing a typhoon on the other side of the world.

Only for me, it wasn't a butterfly beating its wings.

It was the hiccups.

Back on April 1st, I stopped at Wendy's after teaching my evening WR 122 class and picked up a quarter pounder, fries, and a Diet Pepsi.

The meal gave me the hiccups.

I didn't think much of it. The hiccups lasted about twenty-five minutes, but subsided.

I was feeling a little funky, slightly fatigued, lacking focus. I released my 10:00 students early, unable to sustain a class for an hour and fifty minutes.

Soon after the students left, the hiccups returned. I hiccupped all through a conversation with Cheri, editor of the college's literary magazine, Denali. cnversation.

The hiccups intensified while I had coffee with Karen, a Facebook friend.

I arrived home. The hiccups were three hours old. I ate spoonfuls of peanut butter, swallowed sugar, drank several glasses of water, held my breath, drank squirts of RealLemon from the plastic lemon, and tried other hiccup remedies I learned online.

I put the one sure cure into action: I made myself vomit.

I made myself vomit.

The hiccup and vomit, leaving and returning cycle lasted all through Thursday night, all day and night Friday, and finally ended Saturday when Debbie brought home a homeopathic remedy.

The hiccups and throwing up had ravaged me.

I was a wreck.

My voice was nearly shot. I had a terrible cough. I was exhausted.

Pneumonia had settled into my lungs, in multiple places.

Whatever the case, it was early April and I was about to be ill for the next 75-80 days.

It all started, like the beating of a butterflies wings eventually leading to a typhoon, with single hiccup.

Poured Like an Anode by raymond pert at 8:43 PM