1.  David slept in until nearly nine o'clock. He enjoyed oatmeal with brown sugar for breakfast and then he and the Deke went to the library, picked up a few things at the store, and returned to our apartment home. They had bought a part of a very sweet watermelon and David plunged into a bowl of watermelon cubes and was unreserved in telling us how much he loves watermelon. He stayed with us until mid-afternoon and was easy to have around, thanks in large part to his well-developed ability to keep himself busy all on his own. He told us that some time he'd like to spend two nights, not just one.

2. Hiram and Molly and Hiram's brother and girlfriend had tickets to see the Baltimore Symphony Orchestra perform at the Swarthmore in Bethesda tonight, so the Deke and I watched Olivia, David, and Ana -- which didn't require a lot of us. Yes, David and Olivia resisted -- weakly, I might add -- the idea of going to bed when they wanted, instead, to play Zelda on their video game console, but the Deke was calm and firm in her approach to prying them away from the console and sending them to bed. It was an easy evening -- in fact, the Deke and I each took over a couch and slept quite a bit until the concert goers returned.

3.  Christy and Carol's reports from Kellogg comforted me. Mom seems to be feeling better. If the Wednesday trip to Post Falls tired her out quite a bit, she seems to have recovered well and she's looking forward to a Mother's Day dinner over at Christy's.  Carol ordered Mom a bouquet of Mother's Day flowers from the Deke and me that would work well in her room at Kindred and Mom really enjoys them. In fact, Carol took a picture of Mom, looking pretty good, I think, with the bouquet: 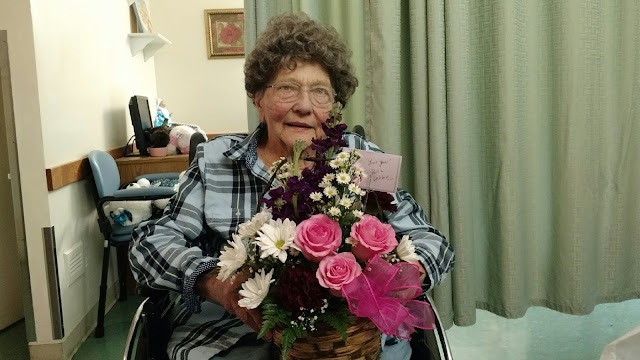 Poured Like an Anode by raymond pert at 3:54 AM