1.   After picking up my rental car, I decided to make the most of my drive to Albany and stopped, for the first time, at the William F. Finley Wildlife Refuge.  I took pictures, stopped at several turnouts, breathed the fresh air, deeply, and took pictures.  I am eager to return.  Maybe this picture will help you see what I enjoyed so much about this place: 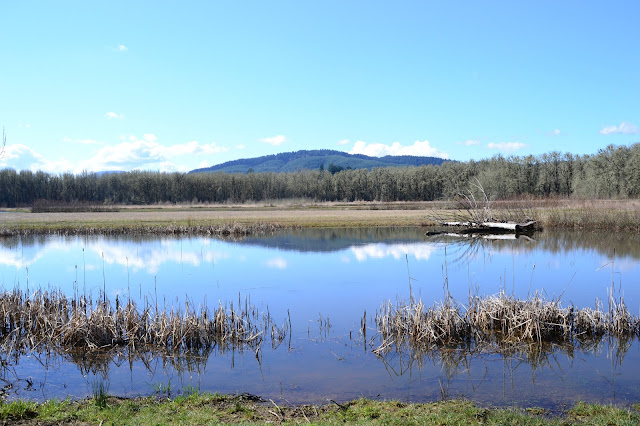 2.  I strolled around Corvallis for a while, taking a few pictures, and then went to Old World Deli, where I hadn't eaten since 2004.  While I enjoyed my roast beef and swiss sandwich, the real pleasure of my light lunch was drinking some Oregon Trail IPA.  I rarely drink IPA, but since Old World has been brewing beer for over twenty-five years, I thought maybe they brewed an IPA that didn't hyper hop its beer.  I was right.  The Oregon Trail IPA was balanced, citrusy, refreshing, and not revved up with hops.  It was a pleasure to drink an IPA I could really enjoy.

3.  Mike Stafford, Terry Turner, and I met at the Albany EconoLodge, checked into our rooms, and drank a couple drams each of Jameson's Irish Whiskey.  We fell right into easy conversation and good hearty laughs, further sealing our Kellogg brotherhood.  We took our brotherly spirit to Novak's Hungarian restaurant and enjoyed a chicken pate appetizer plate, the house pilsner beer, as good a beer as I've had, and our food.  I had Beef Porkolt, cubed sirloin tip in a specially seasoned mushroom gravy, served over homemade Hungarian pearl noodles.

Poured Like an Anode by raymond pert at 8:52 PM