1.  I started my fifteen hour day of travel by jumping into Christy and Everett's Jeep Cherokee and cruising to Coeur d'Alene (a.k.a. Breakfast Town) where I got dropped off at Nosworthy's Hall of Fame so that I could snark down some superb biscuits and gravy and eggs with four friends I have known for over 50 to 60 years.  Here we are in this picture, from left to right:  Scott Stuart, Jim Byrd, well, me, Steve Jaynes, and Roger Pearson. We managed to squeeze in a lot of good talking, remembering hilarious things that happened when we were young and talking over some of the things that preoccupy our thoughts now that we are in our sixties. 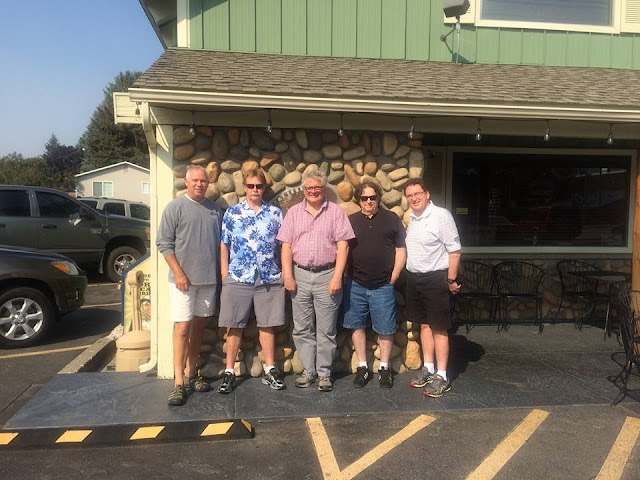 2.  My flight to Chicago, my layover and delay in Chicago, and my flight to Balitmore took a lot of time, but I hardly noticed as I read about two thirds of Seth Davis' superb and absorbing biography of John ("Pert") Wooden, Wooden: A Coach's Life.

3.  I was down at Gate 10 in the B Concourse of the Midway Airport and a guy and his girlfriend and his mother asked me, in an agitated tone, one of anxiety, if I was flying to Baltimore.  "Is it leaving from B10?" the guy asked.  I replied, calmly, that I thought it was.  But, a quick bit of looking deeper revealed that B10 was closed -- I hadn't noticed. The agitated mother said that "a sign down there" said the plane was leaving from B24. I nodded, this being new information, and they trotted off to get this confirmed. Soon they came back to me. They'd talked to a Southwest ticket agent.  Yes.  B 24.  I thanked them, thinking that if they hadn't been so kind as to tell me about the gate change, I might still be sitting in Chicago, absorbed in tales about John Wooden.

Poured Like an Anode by raymond pert at 7:03 PM