1.  If I were to tell the world via Facebook that I have a relationship with the clutch on the Subaru, I'd have to say it's complicated.  This morning I decided to have the clutch looked at down at Reco's Muffler and Auto Repair at the corner of Railroad Ave. and North Division St. in Kellogg.  I like going there because it's owned by Randy Smith who was my tentmate during the 1969 National Boy Scout Jamboree in Farragut State Park in Idaho.  Randy found little to repair in the clutch.  I liked that.  And we had a good talk about life at this stage when our mothers are in their 80s.  His mother lives with him and he's doing the right thing and it's difficult.  Yeah, I understand...not always easy to do the right thing.

2.  Christy and Everett drove down to Spokane and Carol, the Deke, Mom, and I drove over from Kellogg and we met for a late lunch/early dinner at the Longhorn BBQ on North Argonne in Spokane Valley.  Tomorrow Everett turns 84 and Carol turns 51, so we were celebrating their birthdays and we were having one last whole family get together before the Deke and I hit the road for Virginia. Mom loved her ribs.  Christy and I were deeply relieved.  I loved my NoLi Longhorn Ale.  And, as you can see, brother-in-law Everett and I enjoyed sitting side by side: 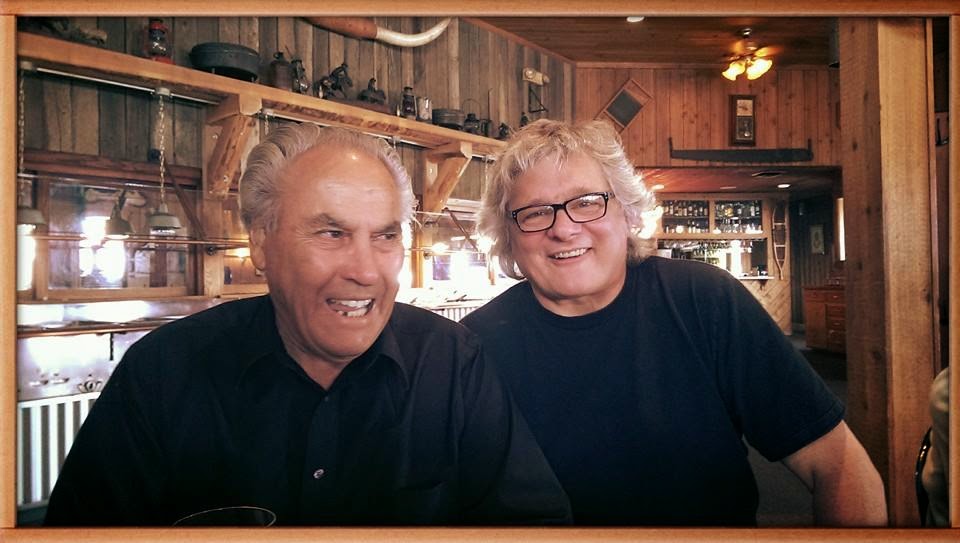 3. I purchased a couple bottles of Canada Dry ginger ale at the Wal-Mart in Smelterville and the cashier lit up and asked me if I'd ever made my own ginger ale.  I told him that I had not, and he beamed all through his explanation of how he makes it and how wild ginger grows at his hunting camp and that he harvests a lot of it for making ginger ale and how he loves to go into the field of ginger and rub his hands in it and smell the ginger on his hands.  This man was spiritually transported as he told me this story.  It was as if he broke into blossom right there on the job in Wal-Mart.  It was mystical.  Joyful.
Poured Like an Anode by raymond pert at 8:09 AM