1.  Today is Raymond Harold "Pert" Woolum's birthday.  Had he not died in 1996, he would be 80 years old today.  Here are a couple of pictures of Dad.  The first portrays how happy he was on InlandEmpireGirl's wedding and the second is at Dick and Floyd's with a mystery man.  None of us, in our family, know who he's with in this picture.  Dad looks to me like he's just played a round of golf -- he loved that Ben Hogan cap.  He loved people in Kellogg, too.  You can see his enjoyment in both of these pictures, taken in Kellogg. 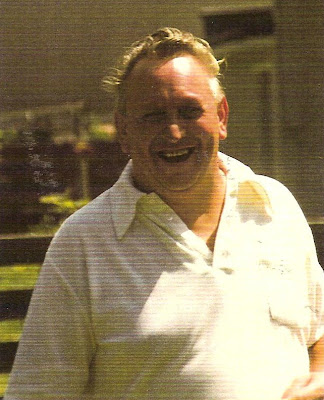 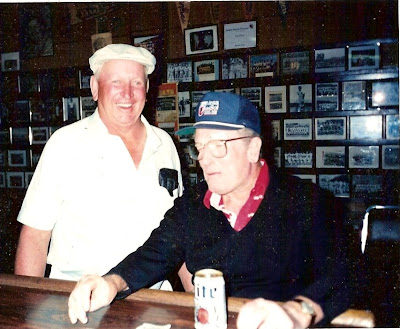 2.  Since a television signal doesn't come into our house, now when I see something on TV, I feel stimulated like I did back when the Gallahers bought a color television and I saw the opening of Bonanza in color (or maybe it was Walt Disney's Wonderful World of Color) at their house or when we went to Betty Gulman's to see Cinderella in color with Leslie Ann Warren.  I had this very feeling tonight at Billy Mac's when all my friends left and I stayed, bellied up to the bar and drank ice water, and watched the last two or three innings of the Giants' drubbing of the Rangers, 9-0.
3.  As the game was winding down, Claudia, the friendly, hard-working waitress on Thursday nights at Billy Mac's came over to tell me she wouldn't be at the restaurant next week when the bunch of us come in for our regular get together.  Due to financial difficulties at Billy Mac's (temporary we hope), she'd been laid off.  It was around 8:00 and things had slowed down at the restaurant so she took some time to tell me how much she would miss working there and miss our Thursday night table and when her shift ended we hugged good-bye, both with the hope that business might pick up again and Billy Mac's would need to hire her back.
(This really isn't such a beautiful thing, but I want to have a written record of it.  I want to remember Claudia and our talk.  I sure hope to see her again.)
Poured Like an Anode by raymond pert at 10:08 AM