1.  I walked around a lot today:  scouted pictures to take, shopped at the Kiva, shot some pictures, had blood drawn, and I went back to the tables outside The Strand and sat with a coffee and took some more pictures at 8th and Charnleton.  I don't think this is like a great photograph, but I like the sense of congeniality and purpose these three had as they came outside, their time together over, summed up what they had to say to each other, and moved on. 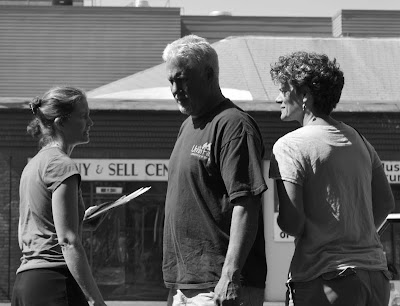 2.  MB, Jeff, and Michael got together for some conversation at the Wandering Goat and talked about all sorts of things, but our conversations about movies made me ache with pleasure.

3.  I went from the Wandering Goat over to Sixteen Tons.  I wanted to try one interesting sounding beer in particular and it turned out to be very different than I expected.  I'm learning at Sixteen Tons that the word "beer" is a much wider word than I have ever known before.  I thought back it 1979 when Eileen and I went to England for three months and I tried every Real Ale I could that I had sampled a lot of beer.  Those beers were all within a family of porters, bitters, IPAs, and other English beers.  The beers at Sixteen Tons go way beyond that and so every time I visit Sixteen Tons, I'm introduced to a fermented drink unlike any I've tasted before.  I walked in having decided that I wanted to have a glass of Russian River Consecration.  It's a wild ale, described at beeradvocate.com this way:

Sometimes Belgian influenced, American Wild Ales are beers that are introduced to "wild" yeast or bacteria, such as: Brettanomyces (Brettanomyces Bruxellensis, Brettanomyces Lambicus or Brettanomyces Anomolus), Pediococcus or Lactobacillus. This introduction may occur from oak barrels that have been previously inoculated, pitched into the beer, or gained from various "sour mash" techniques. Regardless of which and how, these little creatures often leave a funky calling card that can be quite strange, interesting, pleasing to many, but also often deemed as undesirable by many.


Russian River's Consecration seemed almost like wine to me.  It had been aged in a cabernet barrel (I think) and this aging shaped its sour, winey taste.  I'd never drunk a sour ale before and Colin, who poured mine, told me this was a very intense one to start with.  I agree.  It was intense and, for me, so bewilderingly different from anything I'd ever drunk before, that I might just have to have another one day when I know better what to expect.

My second pint wasn't nearly so different.  I enjoyed a very slow pint of Big Al's Summer Helles.  I took my time for a couple of reasons.  First of all, Dane, a young guy who just moved here from the midwest, struck up a conversation with me.  That pleasantly slowed me down.  Secondly, after drinking Russian River's Consecration, my taste buds needed some recovery time to move out of the wild ale sourness into this beer which is more of a lager.  As my taste buds made the transition, I enjoyed Big Al's Summer Helle more and more.
Poured Like an Anode by raymond pert at 9:04 AM