Sunday Scribblings posts a new prompt each week about Friday/Saturday and invites submissions. If you like writing assignments for your blog, check it out. This week's prompt: Secret Identity. 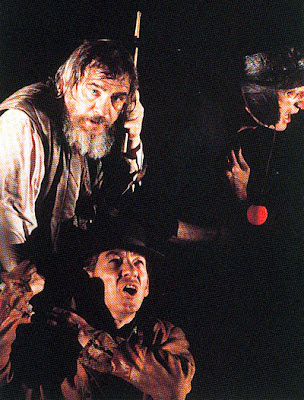 IMMEDIATELY, I think of Shakespeare's play King Lear. In the first act, the eighty-year-old king, in a fit of rashness, banishes the daughter who loves him most, Cordelia, and the subject most loyal to him, Kent.

I've thought long and hard over the years about Kent being in disguise and I've concluded that Shakespeare intensifies the chaos and danger of this world of King Lear by portraying the way that in a world of evil, those who are good must assume a secret identity in order not to be killed. But it's more than survival. Kent must deceive the king to serve him. He cannot do the good he wants to do with his actual identity. He must mask it. He must assume a secret identity.

It's one of my favorite and most complex ideas the runs through Shakespeare's play: virtuous deceit. In order to be good and to try to do good, characters like Rosalind, Friar Lawrence, the Friar in Much Ado About Nothing, Hermione and Paulina in The Winter's Tale, Puck, and others cannot be openly good. They have to apply poison to poison and cure deceit by being deceitful.

Shakespeare seems obsessed with how can one be moral in a mutable world. He distrusts the idea that moral codes should remain fixed or static when the world itself is always in flux. He never asks it outright, but implicitly he suggests that to make the best and most moral response, characters, and, in turn, we must be morally alert and flexible. We cannot apply the same moral code to each thing that happens. Shakespeare almost always portrays flexibility as morally superior to rigidness.

I act on this a lot in my work as a community college English instructor where I work with myriads of different students who come to my classes from a wide variety of contexts. Many of my students are in deep trouble of one kind or another. They might be freshly released from prison. They might be in deep poverty. They might be recovering from drug addiction. They might be starting over after divorce. They might be trying to gain confidence and purpose after having been beaten up and trapped in a cruel marriage.

As I work with these different students together in the classroom, I portray a fairly consistent identity as an instructor. It's an identity (or a persona) different than my one at home or when I'm playing poker with friends in Kellogg. It's a secret identity to people who don't know me as an instructor. My identity elsewhere is a secret to my students.

As an instructor to these many different students, I sometimes assume a secret identity with some of these students in my office or away from class. It's an identity I can't always show the whole class. More often than not, it's a more lenient person, a person who is willing to bend institutional rules, deceive the college, in you will, in order to help the student and possibly give the student a break.

Like King Lear in the beginning of Shakespeare's play, officers charged to run institutions are very suspicious of rules being bent or broken. They operate in an imagined reality where to treat people equally, you must treat them the same.

I know this isn't true. To treat people equally is to treat them justly. I treat my students equally in this regard. But justice and fairness can have multiple faces, and often in order to do the right thing, I must assume a secret identity, and like Kent, do what I think is right from behind a disguise or a mask.

This virtuous deceit, in my work and elsewhere, has done more to help me live with a clear conscience than any other factor in my life.
Poured Like an Anode by raymond pert at 7:14 PM

This post is very interesting. Though I do not much lke Shakespeares's play but he was a master of disguise. In many of his plays, important character took up secret identities.

How observant and thought-provoking. It looks like I should spend some time reviewing the classics.

A very thought provoking post. I was going to nominate you for the Thinking Blogger award but I see you have it already. My hubby has gone to college through Worker's Comp, after being out of school for 20 years, it's teachers like you that he relates to the most. The ones who are flexible within the rigidness.

I have nominated you for the Thinking Blogger Award, if you would like to read more about it, go to my post:
http://jenshumbleopinion2.blogspot.com/2007/04/thinking-blogger-award.html
I know you've already won it, but I finally understand this part of Shakespeare play!

"virtuous deceit" - I will remember that...

gautami Thank you for your praise. I hope you will one day enjoy Shakespeare's plays more.

colorful prose I agree. You should return to the classics. The writers of antiquity are, in fact, our contemporaries when it comes to matters of the soul.

jennifer I'm very happy this post helped you understand the disguises of Kent and Edgar. So often it's the evil-doers who disguise themselves and here, as other of Shakespeare's plays, it's those who are good.

dailypanic It's a difficult concept because it's hard to know when our deceit is virtuous, but Shakespeare loves playing with this idea.

crafty green poet It's gratifying to read you found this piece provocative and I hope you'll come back to my blog and visit some more.